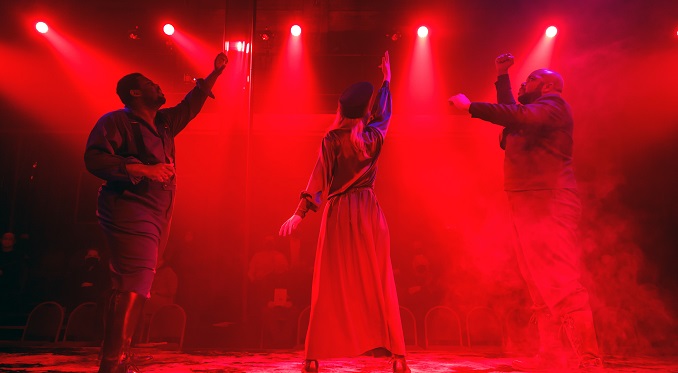 Pittsburgh Opera will broadcast a video recording of its world premiere of Christopher Cerrone and Stephanie Fleischmann’s In a Grove in its entirety, for free, on YouTube Sunday, May 15th at 7:00pm.

The opera, based on the short story by Ryūnosuke Akutagawa, had its world premiere at Pittsburgh Opera’s headquarters the Bitz Opera Factory February 19th through March 3rd, 2022.

On one level a murder mystery, on another level a searing investigation into the nature of truth and limits of perception, In a Grove’s story revolves around trying to determine who killed a young husband in the woods of the Pacific Northwest.

Audiences and critics raved about the sold-out performances:

“Countless people, both those who attended the performances and those who were unable to, have pleaded with us to release In a Grove on video”, said Pittsburgh Opera General Director Christopher Hahn. “Our generous funders enabled us to record the performances, and we are delighted to make this amazing opera available to a much wider audience.”

A trailer is available for viewing on Pittsburgh Opera’s YouTube channel.

People can register online to receive email reminders and a link to the Premiere. The video will remain available for viewing throughout the summer.