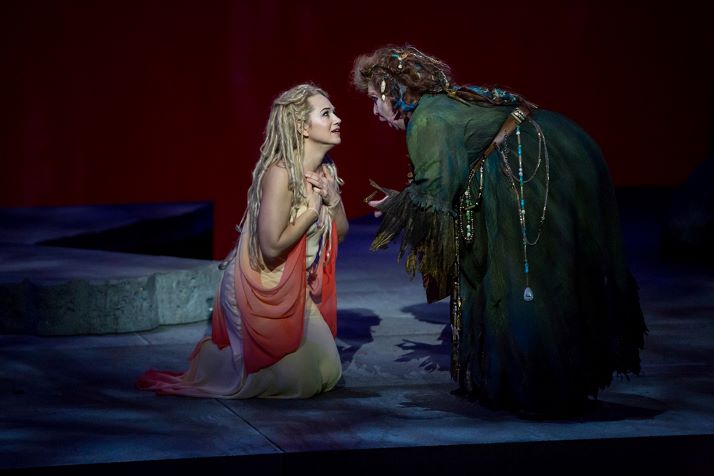 Rusalka the water sprite gives the witch Ježibaba her voice in exchange for being made human. Photo by Dan Norman.

Rusalka is the Czech version of the popular fairy tale The Little Mermaid. While it has many similarities to the familiar animated movie, they are not exactly the same. First of all, her name is not Ariel, it’s Rusalka. Secondly, Rusalka is not a mermaid per se, but a water sprite, also called a water nymph. However, like the Little Mermaid, Rusalka falls in love with a human Prince. She has a witch turn her into a human in exchange for her voice. Rusalka must win and keep the Prince’s love, or else there will be disastrous consequences for them both.

Rusalka premiered in 1901 and has become one of the most beloved lyric fairy tales of all time. These are the first-ever performances of Rusalka in Pittsburgh Opera’s 84-year history.

Language: Sung in Czech with English supertitles projected above the stage

Single tickets go on sale August 15th. As part of Pittsburgh Opera’s continued efforts to make opera accessible to all members of the community, single tickets for the 2022–23 season start at just $15. In addition, tickets for kids and teens ages 6–18 are half price.

For tickets call 412-456-6666, visit the Box Office at Theater Square, or online at pittsburghopera.org/tickets or CulturalDistrict.org.

Tickets as part of a subscription package are available at pittsburghopera.org/subscribe.

Pittsburgh Opera is committed to making opera accessible to all groups by providing great discounts and special benefits to group ticketholders. A group at Pittsburgh Opera can be as few as 6 people!  In addition, college and university students, faculty, and staff are eligible for our Cheap Seats program – see pittsburghopera.org/CheapSeats for details. For more information about group ticket services and discounts, contact Wendy Parkulo at (412) 281-0912, ext. 213 or via email.

See the Rusalka webpage for the full Cast and Artistic Team

See the Rusalka webpage for a synopsis of the opera