The 24 poems and songs of the Winterreise tell an anguished story of lost love, through what is essentially a single dramatic monologue, sung here by Pittsburgh Opera Resident Artist tenor Eric Ferring.

The protagonist (Eric Ferring) reminisces about a Linden Tree, a reminder of happier days.

Savage Winter is set in the present day, and unfolds in a run-down motel room in the desert of the American West. The protagonist must confront his demons and face up to everything he has done, and all he has lost, in his life. He is searching for forgiveness, enlightenment and atonement.

Mr. Ferring will be accompanied by three on-stage musicians, led from the piano by Pittsburgh Opera Director of Musical Studies Mark Trawka. Also included is a trumpet, an electric guitar played by the composer himself, and electronic sound effects. The musical style is ‘21st century art-song,’ infused with acid jazz and punk energy, to create a very raw and emotional experience.

The Protagonist confronts his demons. Photo by David Bachman.

The Protagonist looks for solace in a bottle. Photo by David Bachman.

The Protagonist sings of The Linden Tree. Photo by David Bachman. 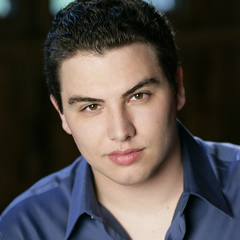 Here's what other people are saying about Savage Winter (previously called Ashes & Snow):

The Protagonist dreams of springtime and love, but wakes to cold and darkness and the shrieking of ravens.

The Protagonist wonders "Why do I take secret ways and avoid the other travelers?" as he becomes increasingly agitated.

A dancing light wants to lead the Protagonist astray, and he is glad to go along.

The Protaganist implores himself to have courage in his time of troubles, reminding himself that pain is "for fools".

The Songs, in Brief

The poems upon which Savage Winter is based “tell the story of a lonely traveller who ventures out into the snow on a journey to rid himself of his lost love. Along the way he experiences a turmoil of different emotions, mostly ranging from despair to greater despair.” - Jeanell Carrigan

The following brief synopsis of each of the Winterreise’s 24 poems is adapted from Wikipedia.

Full texts of the songs, with a good translation by Celia Sgroi, are available as a PDF at http://www.gopera.com/lieder/translations/schubert_911.pdf

Listen to Pittsburgh Opera General Director Christopher Hahn give a brief synopsis of Savage Winter featuring excerpts from the following audio clips from a special concert performance of the new work at the University of Miami, courtesy of Schott Music Corporation & European American Music Distributors Company:

Savage Winter is being developed in partnership with American Opera Projects (AOP).

AOP is at the forefront of the contemporary opera movement, commissioning, developing, presenting, and producing opera and music theatre projects, collaborating with young, rising, and established artists.

This will be the fourth Pittsburgh Opera project involving AOP, and the third in the past two years. AOP developed Paul’s Case and co-produced its 2013 premiere, produced the world premiere of As One, which Pittsburgh Opera performed in February 2017, and developed The Summer King, which made its world premiere at the Benedum Center in April 2017.