*Due to COVID-19 concerns, Soldier Songs was presented as a livestream only. We did not host in-person performances. We would have loved to have patrons in our theater again to see this opera in-person, but we recognized social gatherings were not practical given the significant spike in COVID-19 cases in the area. We welcomed all to join us on Friday, December 11th, 2020 for a free livestreamed performance of Soldier Songs, broadcast on our Facebook and YouTube channels.*

Soldier Songs combines elements of theater, opera, rock-infused-concert music, and animation to explore the perceptions versus the realities of the Soldier, the loss and exploitation of innocence, and the difficulty of expressing the truth of war.

The libretto by composer David T. Little was adapted from recorded interviews with veterans of five wars. Soldier Songs traces the shift in perception of war from the age of 6 to the age of 66. We follow the abstract character through the three phases of life: Youth (playing war games), Warrior (time served in the military), and Elder (aged, wise, reflective).

Each of the eleven songs in the production explores a different aspect of the soldier’s experience, ranging from rage, to fear, to joy, to grief. Multi-media is employed as a critique of the media’s ability to both glamorize and falsify the truth of combat.

Soldier Songs asks tough questions and tells tough stories through its poignant libretto, driving and devastating music, and surprising visual counterpoint. The tension between the visual and aural experience works to dispel any potential numbness felt by those lucky enough to only experience war through the comfort of their living rooms.

Originally commissioned by the Pittsburgh New Music Ensemble, which premiered the work in 2006, Soldier Songs received its workshop premiere in New York on 2008 by Beth Morrison Projects, and directed by Yuval Sharon. The full world premiere production took place in 2011 at the International Festival of Arts & Ideas in New Haven, CT. Pittsburgh Opera’s performances are by arrangement with Hendon Music, Inc., a Boosey & Hawkes company, publisher and copyright owner.

"I listen to Metallica to keep me in a rage!" Photo credit: David Bachman 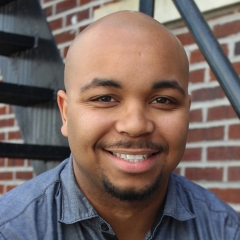 Soldier Songs contrasts the perceptions and realities of a soldier from the age of six through sixty-six. Based on interviews with veterans, and the culmination of 9 years of work by composer David T. Little, Soldier Songs is constructed in three sections: Child, Warrior, and Elder, yet the movements flow seamlessly from start to finish.

CHILD
A boy first encounters war through toys and games, playing with action figures available with an arsenal of accessories. As he grows, video games replace these dolls. These games offer an immersive, combat-like experience in which the player kills countless "enemies," and where the only consequence of the player’s death is a brief wait while the game reloads. As the boy becomes a young adult, the game becomes more real. He registers for the draft at age eighteen. Reflecting on the highly randomized selective service process from the Vietnam War, he counts each day with a passing dread at the thought of combat. Once deployed, he counts the days again, but differently: down from 365, hoping he makes it to one.

WARRIOR
The boy is now a modern-day soldier. As technology has changed the tools and language of war, it has also changed the experience of combat. The soldier creates his own soundtrack: piping heavy metal into ear buds, he recreates the feeling of the video game, shooting abstract enemies that appear as pixels on a screen. But the game becomes too real, and the brutality of war sets in. Images of death, destruction and killing that may have been exciting in action movies back home, now play out with horror before his eyes. He seeks refuge from incoming ordinance; an unbearable experience that he knows will stay with him for the rest of his life.

ELDER
The stories diverge. Veterans reflect on their experiences in combat, or discuss the challenges of reintegration into civilian life. One man reflects on the futility of an endless war. Another confronts the bereavement team sent to notify him of his son’s death in combat. The opera concludes with recorded interviews—the composer’s family and friends: the soldiers who inspired this work—as our soldier opens his mouth to tell his story.